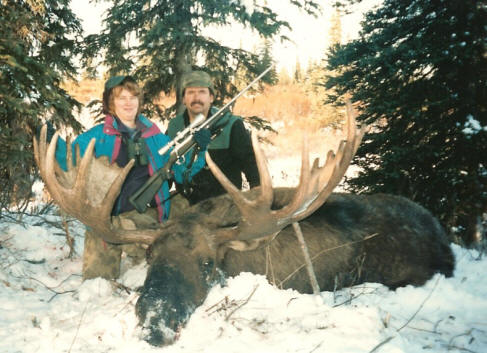 My husband and I started Alaska Remote Guide Service based in Wasilla, Alaska in 1986 and since have specialized in guided moose and brown bear hunts. We also sell a moose hunting and calling instructional video-“Love, Thunder and Bull in Alaska”-and market a durable, five function fiber glass megaphone for moose calling-“The Bull Magnet®”-which I make myself.

I grew up in Michigan and prior to this past September, had only shot small game with the exception of one six point whitetail buck. Wayne, my husband, has always wanted to take me moose or bear hunting, but never had the time, dealing with his guiding obligations each season.

Wayne bought me a .30-06 stainless Ruger equipped with a 3X9 Leupold for Mother’s Day two years ago, but the only chance I’d had to use it was at the shooting range.

My luck changed this past fall, however, when we finished with our last hunter with four days of moose season still remaining. I had just recovered from five weeks of pneumonia and had some reservations about going, especially with almost a foot of snow on the ground and the temperatures in the teens.

I agreed to try and on Friday evening we flew to one of our camps in the Super Cub. After Mason, our packer and Wayne had made necessary preparations for the next day, we set the alarm for 6:00 AM and turned in. I wasn’t too thrilled with the “camp mouse” that Mason kept around to keep him company.

We had only gone a short distance from camp the next morning when Mason heard a bull grunting, which Wayne answered with short, deep grunts, scraping sounds and even a cow call, using the “Bull Magnet®” for all three effects. That bull came within 25 yards and I had him in my sights for several minutes before he caught our wind and left. He had a 55-60 inch spread but only two brow tines on each side. I found it very exciting to be so close to such a large animal and to hear him “talking” to us. I was certainly disappointed when Wayne decided we should pass and try for a bigger one!

On Sunday morning we were a short distance from camp in the opposite direction when Wayne stopped in a clearing and made some short, deep grunts. Immediately Mason saw two bulls on a brushy hillside about 200 yards off. They had been bedded down, but bolted when they heard Wayne’s calls. They appeared to be squaring off for a fight when Wayne sounded a loud cow call, at which point the larger bull broke away and headed directly toward us. We hadn’t anticipated such a quick response and were still out in the open, so we crouched down and kept still. Wayne did a couple more grunts, and the big bull advanced, this time in a circular direction to try to get down wind of us. When he was about 80 yards away, my husband started to get nervous about him catching our scent, so he gave me the go ahead to shoot, which I was relieved to hear as my hands were nearly frozen and I had doubts about being able to pull the trigger.

After a solid shot in the chest, the huge beast remained standing and I heard Wayne chamber a round in preparation for a back up, if necessary. I informed him I didn’t need his help and wanted to finish the job myself, which I did!

I have handled tons and tons of moose meat over the years from Wayne’s successful hunts, but never had I witnessed an entire moose on the ground. His body and rack were huge! Now the real work was to begin, as they say. After numerous photos, I pitched in with the guys, holding legs, pulling hide, filling meat bags, etc., while Wayne and Mason did an expert job of caping and butchering the animal.

I shot my bull at 8:30 AM on Sunday morning, September 29, 1996. He had a magnificent rack with good palms and 3 brow tines on each side and measured just 1/4 inch shy of 60 inches!
It was really fun and educational for me, to see a product that I had been making and selling for four years work so well, especially on my own moose! Of course, Wayne’s experience and skillful calling techniques played a big part in my success.

I’ve read quite a few negative editorials in the Anchorage paper about trophy hunting this past fall, in response to a story they ran on a bow hunter who harvested an 82 inch moose. Some folks obviously don’t understand trophy hunting!

We passed on a very healthy bull the first day of the hunt that had many productive years ahead of him, opting for a chance on a larger animal. My bull was wounded severely from fighting and probably would not have survived the winter (the cape had so many puncture wounds, the taxidermist couldn’t use it!) While our main focus was a nice trophy, the delicious meat is certainly important to us and we don’t waste a thing. Our decision to wait for a larger animal paid off, but as often as not, trophy hunters go home empty handed.

Mason did an outstanding job of capturing my hunt on video, and I have relived the experience many times already in the comfort of my warm home. Wayne has informed me that now that he has finally got me started, a bear hunt is in the works, and then a hunt for a trophy ram. I’m looking forward to it, and would certainly recommend hunting to any woman!